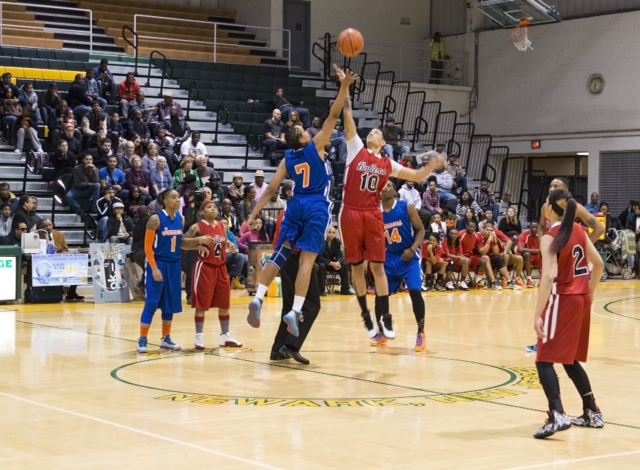 Global Mixed Gender Basketball (GMGB) is here! We are the first and original professional co-ed basketball league, featuring men and women playing together on the same team. In the first quarter there are three women and two men on the court; the second quarter, two women and three men, alternating each quarter.
Mixed gender basketball has been around since 2013, founded by James Scott, president and CEO of GMGB, who is taking this league to the next level.  We have been recognized and covered by The New York Times, Ebony magazine, and earlier this summer was featured in an episode of Watt’s World on the Travel Channel.
We are looking for 200 professional male and 200 professional female athletes to fill positions on eleven teams, six in New Jersey and five in New York. In New Jersey, there will be a team representing each of six counties. They will be called – the Essex County Mayor’s Players, the Camden County Mayor’s Players, Union, Morris, Hudson and Bergen County Mayor’s Players. The five New York teams will represent each of the five boroughs, Manhattan, Brooklyn, the Bronx, Queens, and Staten Island. Open tryouts will be held in November at the Prudential Center in Newark, NJ.
In addition to bringing a new and exciting concept to basketball, scholarships will be given to one male and one female from each of the counties participating in the games. We at Global Mixed Gender Basketball are community minded and we urge you to be also. We have partnered with Civic Cares Community Foundation where you can sign up starting October 1, 2015 to receive a GMGB VIP card for our 2016 season.  Visit www.civicares.com
Tune in now for our commercials announcing the upcoming tryouts being aired on several cable channels. You can also go to www.globalmixedgenderbasketball.com, or call 201-606-2617. So if you’re a baller, contact us and sign up for the tryouts. We’re looking for you!
For additional information and videos about the league, sign in to the website and click on “News and Media.”
Watt’s World – Https://youtu.be/YR9SdHSe9zc